A Life Above Par : An Inside Look At John's Island 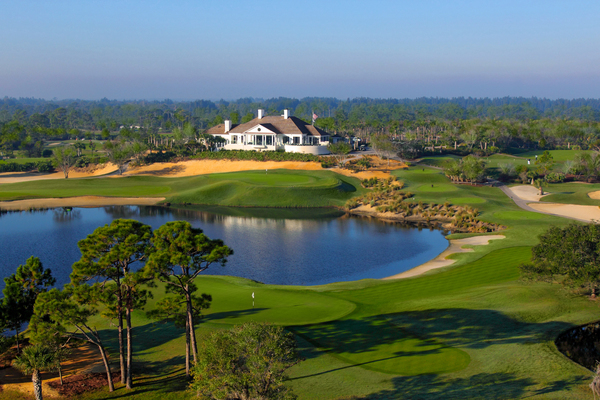 Among the myriad challenges life throws at us, selecting the perfect vacation or second home may not rank as the most onerous, but it’s nonetheless a daunting task. The options, after all, are so numerous. Some communities offer world-class golf. Others lure with an idyllic setting beside the sea. Others offer an array of activities that make them irresistible to families, while at still others the attraction is simply the level of gracious living. Making the right choice can be very difficult.

Or it can be very simple. For there is one place that has it all, one special place that offers everything even the most discerning home seeker could want, all in a single sublime community. That place is the John’s Island Club.

It begins with a magical location, on a balmy barrier island halfway down the east coast of Florida, just where the tropics begin. Cold snaps are rarely an issue here, where the year-round temperature averages 74 degrees, but neither are the brutal heat waves of points farther south.

Ten minutes away is a seaside village named one of the Best Small Towns in America—Vero Beach—its streets lined with quaint restaurants, art galleries, and boutiques, plus a world-class museum and theatre. This is the Old Florida, far from the city congestion and tourist trappings of Miami, Orlando, West Palm Beach and Tampa. No wonder it’s become known as the Hamptons of Florida.

At the center of this serene sanctuary is the John’s Island Club, a member-owned community of 1,650 acres nestled ideally between the Atlantic Ocean and the intracoastal waterway, with an array of residential opportunities from beachfront condominiums to luxury estates. To own a home here is to enjoy a privileged lifestyle that is unsurpassed in Florida or for that matter anywhere else.

Consider the golf alone. John’s Island is home to not one but three superb courses, designed by Pete Dye, Jack Nicklaus, and Tom Fazio, each with a personality as distinctive as its creator. 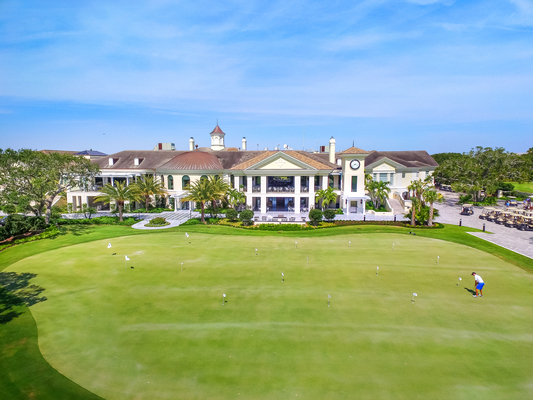 The North and South courses are the heart of the John’s Island Club community and emanate from the same central clubhouse. Dye’s North Course weaves 6,800 yards through corridors of mature oak trees. Although the fairways are amply wide, accurate driving is nonetheless important to avoid the grasp of strategically placed bunkers. The sternest stretch comes at holes six through nine—two par fours, a three, and a five, all of them brawny assignments, while the back nine pivots on the watery par-five 14th, the kind of hole that can yield eagles to those who have strength and courage but bogeys (or worse) to those who don’t. The last three holes, set scenically beside the Indian River Lagoon, are a fitting finale to a golf course that radiates both challenge and charm. 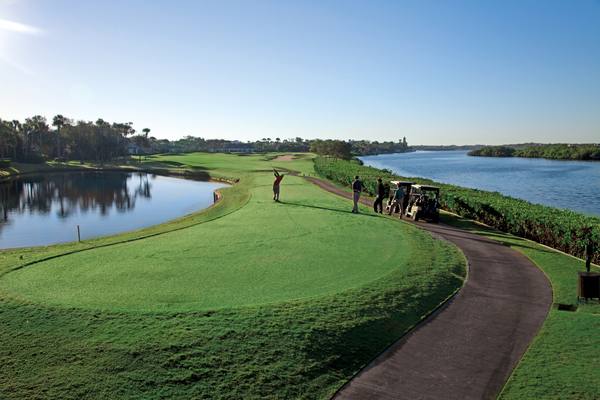 Nicklaus’s South Course, though not as long as the North, calls for careful management and shot-making, its well-defined holes threading through a gauntlet of trees, water, and sand. The front nine is the place to make a score as water hazards loom on each of the last eight holes, most dramatically at the 18th, a Cape hole par four that entices its assailants to bite off as much as they dare in quest of a finishing birdie.

Six miles off campus is the crown jewel of John’s Island golf, the West Course, set on an extraordinary 300-acre site, a massive sand ridge flanked by tracts of marshland. Architect Fazio took full advantage of these elements to create a course where the changes in elevation are stunning, no two consecutive holes play in the same direction, and the examination of one’s skills is unrelenting.

The look and feel of John’s Island West—broad, bounding fairways bordered by tracts of sand and brush—invites comparisons with Pine Valley, Jupiter Hills, and Pinehurst, but this is a golf course with a bold character all its own, based on a beguiling collection of architectural gambits—split fairways and tri-level greens, tiny pot bunkers and 100-yard Saharas, three drivable par fours and four of the most fascinating, vexing, thinking-man’s par fives assembled anywhere. Since its debut in 1988 the West has been ranked among the best courses in the nation, and from the championship tees of 6,900 yards, it is also one of the most demanding. As at the North and South Courses, however, there are five sets of markers so there’s a fitting challenge for every level of player.

Although the West’s fairways are never crowded, there’s no shortage of company. Otters frolic in the wetlands, bass and brim weave through in the ponds, armadillos, tortoises, and box turtles sun themselves on the banks, and ospreys, cranes, and cardinals nest in the trees. It’s an environment so pure, one scientist actually planted an endangered species here just to ensure its safety. Apart from the handsome clubhouse at the highest point of the property, there is no structure in sight. This is serenity itself.

And just how strong is the golf at John’s Island? In October of 2015 the Club hosted one of the most prestigious events in the game, the U.S. Mid-Amateur Championship. The six-day competition had 36 holes of stroke-play qualifying on the North and West Courses to determine the 64 competitors who proceed to match play on the West, with the champion winning the USGA’s Robert T. Jones Memorial Trophy along with an invitation to the Masters. 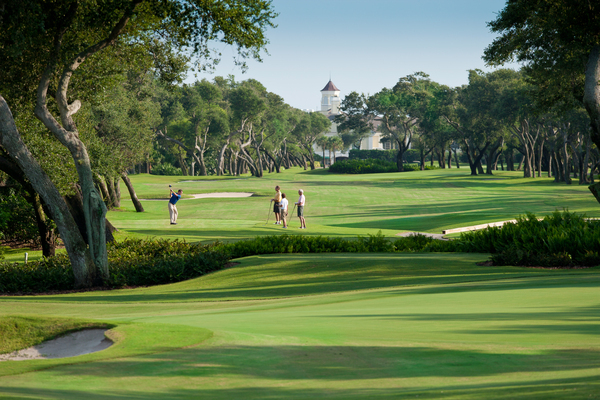 But golf is far from the only game in town. The Vero Beach area has long been a magnet for the best professional tennis players in the world, and there are no better facilities than those enjoyed by the members of the John’s Island Club —18 Har-Tru courts along with a courtside café and a pro shop staffed by a team of USPTA professionals. This is also the only gated community in south Florida with air-conditioned North American doubles and singles squash courts.

The expansive main clubhouse that services the North and South courses also is home to a state-of-the-art health and fitness center with more than a dozen personal trainers and massage therapists on staff. Weekly classes are available in yoga, pilates, zumba, circuit training, and more, and there is also a comprehensive fitness/lesson program tailored specifically to golfers.

For bicyclists, joggers, and walkers, the club’s private, tree-lined streets offer over 20 miles of trails. And for those who prefer something a bit less strenuous, two full-size croquet lawns are available for casual play or tournament competition. The club calendar also offers plenty of stimulation for the mind and soul, everything from book clubs to bridge camps, speaker forums to computer classes, trivia contests to wine tastings.

And on top of all this, the John’s Island Club has something that few if any communities can match: three miles of private white sandy beach center-pieced by a magnificent 50,000 square-foot Beach Club. Since the day it debuted five years ago after a multi-million-dollar reconstruction, this has been the focal point of club activity. Set on a slight rise just a few paces from the beach, with an open-air design that combines the classical and tropical, the Beach Club offers multiple dining options, all of them with spectacular views of the sea.

A favorite gathering point is Rafters with its rough-hewn beams, tall tables, and 30-foot-long bar, the perfect place for lunch or lighter meals. For dinner, there’s the casual elegance of the Ocean Hearth or the expansive Island Room where French doors open onto a seaside terrace for al fresco dining. There’s even a cozy outdoor living room complete with a wood-burning hearth for those rare chilly evenings. It all wraps gracefully around an illusion pool that seems to flow straight into the sea.

Back inside is a library, complete with fireplace, card and game tables, and a pool table, as well as an office area for members use, equipped with a computer, printer, and fax machine.

The Beach Club is the ideal place for families to converge, and that’s important, because families are what this Club is all about. A unique vertical membership program allows the parents and children of members to play golf and enjoy all the club’s other facilities and benefits at no extra charge. And no matter what time of the year, there is always something going on for the kids (and grandkids) whether it’s beachside bingo or paddleboard lessons, sports camp or sandcastle building, the Jingle Bell Jamboree in January or Adventure Island Camp in July. 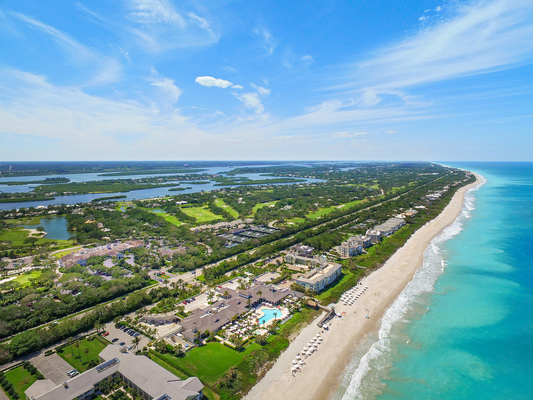 It’s truly this family atmosphere that makes the John’s Island Club the special community it is—exclusive yet unpretentious, vibrant yet relaxed, broad-based yet close-knit, a place to forge the friendships and make the memories that will last a lifetime.

South Course
Reflecting many of the traditional features found on British and Scottish courses, it is the ultimate shotmaker’s course, requiring accurate tee shots and approaches to well-bunkered greens. Nearly every hole on the back nine features water hazards, putting a premium on driving. The South Course impressive enhancements were completed in 2019.

West Course
Home of the 35th annual USGA Mid-Amateur in 2015, resulting in a win by Sammy Schultz with a timely ace on a par-4 lead, the lauded West Course is located six miles from John’s Island. Upon arriving, you will immediately see why it is special. Designed by Tom Fazio and built on a natural sand ridge featuring stunning elevation changes, it is set on 300 acres with its own clubhouse, but without a single residence to intrude on the serenity. Perennially ranked among the country’s most challenging courses, members have a place to get away and revel in its natural beauty while enjoying an array of wildlife in their natural habitat. The newly renovated clubhouse with outdoor dining and panoramic golf vistas complement the indoor teaching facility and two world-class croquet lawns. (West Course map)