John's Island Club executive chef John Farnsworth, once named to Food & Wine magazine's 'Ten Best New Chefs in America' spend the last 18 years overseeing a staff of 127 at John's Island. His attention to detail is proven by the numbers.

"Our membership is changing as newer members come in and their expectations are a little different than some of our founding members," he says. "they're a little more health conscious, and they appreciate the seasonality of the food. They've gotten on the bandwagon of less red meat and more green vegetables."

John's Island was just added to a list of America's healthiest clubs, and while meat loaf and mashed potatoes still rule, the Club uses Creekstone beef raised without hormones. Seafood is delivered six days a week. "Fish sales are extremely high and rising."

Recently, he introduced gluten-free bread. Bread is baked on site in 24 varieties, some of it twice daily. "A baguette or a levain is meant to be eaten three or four hours after it's baked," he says. "There is nobody that has a bread program like us."

Menus are based on what's available on or near the island.  Read complete article here. 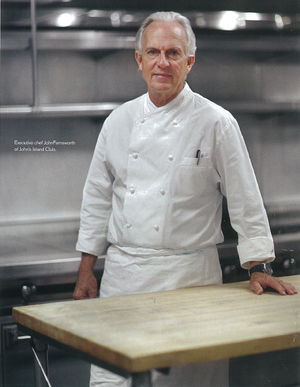